FALL IN LOVE AND FIGHT WITH ALL YOUR MIGHT AS SUPER POWERED YOUTH IN KISSING CAPES!

Based on the wonderfully evocative and creative mechanics of games like "Mobile Frame Zero: Firebrands" and "The King is Dead" by Lumpley Games and "Once More Into The Void" by Sword Queen Games mixed with elements from "Masks: A New Generation" by Brendan Conway, Kissing Capes brings super powered drama and action to your tabletop. You will create a city despoiled by super heroic and super villainy and within it you will play young heroes, villains, and anything in between fighting with your friends and falling in love with your rivals. All you need to play is 2-5 people, a couple of hours, pencils, paper, and a coin or two to get started creating dramatic tales of super powered love, anger, jealousy, and high flying antics.

The current version is 1.1 and includes two pdf files. One containing images and backgrounds the other a more eye friendly version. Several minor formatting and grammar errors have been fixed.

In order to download this game you must purchase it at or above the minimum price of $10 USD. You will get access to the following files:

Support this game at or above a special price point to receive something exclusive.

Each copy of Kissing Capes purchased helps someone else grab a free copy if their budget leaves them unable to pay the listed price. If you're unable to budget for a copy ofKissing Capes priced as listed, please claim one of the free copies provided to the community.

I desperately wish I could afford this one. This looks so cool.

Kissing Capes is a 30 page rpg about messy teen superpowered romance. It's multiplayer---although it probably works best when played with exactly the number of people you want to be in a romance with.

It's also built using the Firebrands structure, so it is essentially a collection of linked minigames, but it builds heavily on that engine and adds some great custom elements of its own.

One thing I'm not used to seeing in romance games is a mechanic for "why is my character attractive?", and frankly it's weird that it's always missing. A romantic game should have some kind of chemistry hook, and Kissing Capes handles that by having you define what's likeable about your character as part of character creation.

It also has a "how I see myself / how society sees me" question built into creation, and that further doubles down on giving the players lots of good, useable information for a romance.

The minigames are also really well-structured, and basically guaranteed to produce charged romantic situations. The text never gets more explicit than implying kissing, but there is the feeling of rather a lot of steam being carefully contained by the text, and if you and someone you already make out with are both into trpgs, maybe buy this immediately.

That said, there is an element in Kissing Capes that I would urge some caution with. Capes has an Influence mechanic, like the sort seen in a lot of PbtA, but instead of being used to push people into doing things, it's used to rewrite other PCs' identities. If you have influence on someone and they don't have influence back on you, you can spend influence to force them to change how they see themselves. Safety mechanics and a good group dynamic can minimize the risk potential here, but it feels notably intrusive. If you like the idea of social power affecting someone else's self-perception, this is a good game for that, but really make sure that's an experience that everyone else in the group wants first.

Overall, I think Kissing Capes is an extremely well designed romantic game. If you like romance trpgs, and if you like the idea of romance within a superhero setting, this is an excellent choice. If you want a game about messy superhero relationships, with no romance included, this can still do that---you'll just want to set some ground rules first. If you don't like superheroes but do like romance, this system is semi-portable. You could covert it to guild rogues in a fantasy setting, or supernatural creatures in a modern supernatural game, without having to really rewire any of the mechanics.

Thank you so much for the review! The influence mechanics are designed to mesh with MASK: a new generation but out of context I definitely understand the concerns and will be tweaking those rules to ensure safety is more at the forefront of the game.

No worries! I definitely don't think they're bad rules, just that they might benefit from some more guardrails or an optional alternative. I haven't seen another game that lets you directly change how someone else sees themselves, and that's cool, but because it's not a mechanic in a lot of games, I don't know that players will be braced and ready for other people to change their character's self-perception like that. 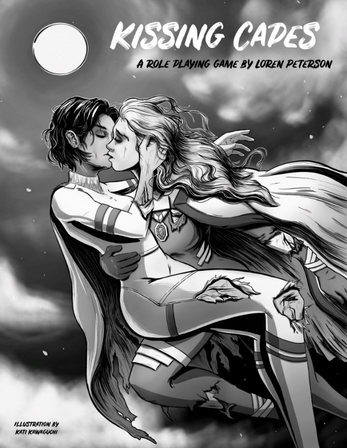